8 Job Search Tips From the Co-Founder of LinkedIn - TULARIN >

8 Job Search Tips From the Co-Founder of LinkedIn 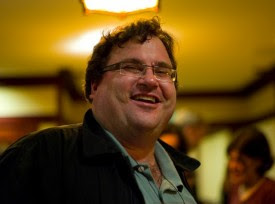 Early on in The Start-up of You, Reid Hoffman takes on the sacred cow of career advice books, making it clear that the timeworn exhortations of What Color is Your Parachute? won’t fly in this economy.
“That’s the wrong question,” Hoffman, the co-founder and chairman of LinkedIn writes (with the help of coauthor Ben Casnocha). “What you should be asking yourself is whether your parachute can keep you aloft in changing conditions.”
Hence the central conceit of the book. Just as Detroit’s dinosaurs fell victim to hubris and an inability to adapt, so will you, dear career seeker, if you don’t mimic the nimble startups of Silicon Valley. Though Hoffman and Casnocha see the struggle through the eyes of one percenters (they don’t seem to know anyone who didn’t go to a good college), there’s lots of good advice that you can apply to your own career. We’ve distilled that advice into eight solid tips that you can apply to your job search today.

1. “A Company Hires Me Over Other Professionals Because…”

To answer this question, Hoffman uses the example of Zappos, which focuses on mainstream shoes and clothes. While it might be tempting to adapt the company’s “over-the-top customer service” to other categories as well, that would make Zappos’s unique selling proposition less apparent. “If you try to be the best at everything and better than everyone (that is, if you believe success means ascending one global, mega leaderboard), you’ll be the best at nothing and better than no one,” Hoffman writes. “In other words, don’t try to be the greatest marketing executive in the world; try to be the greatest marketing executive of small-to-midsize companies that compete in the health care industry.”

Hoffman makes a sharp distinction between his advice and that of Parachute, which, like many self-help books, believes that uncovering your deepest desires is the key to finding your passion. “Contrary to what many bestselling authors and motivational gurus would have you believe, there is not a ‘true self’ deep within that you can uncover via introspection and that will point you in the right direction,” Hoffman writes. “Yes, your aspirations shape what you do. But your aspirations are themselves shaped by your actions and experiences. You remake yourself as you grow and the world changes. Your identity doesn’t get found. It emerges.”

In Hoffman’s formulation, Plan A is what you’re doing right now. Plan B is “what you pivot to when you need to change your goal or your route to getting there.” Plan Z, meanwhile, is your fallback plan. “In business and life, you always want to keep playing the game,” Hoffman writes. “If failure means you end up on the street, that’s an unacceptable failure.”
Hoffman illustrates what he means by Plan Z with a personal anecdote: “When I started my first company, my father offered up an extra room in his house in the event it didn’t work out — living there and finding a job somewhere else to earn money was my Plan Z. This allowed me to be aggressive in my entrepreneurial pursuits, as I knew I could draw my assets down to zero if necessary and still have a roof over my head.” Hoffman writes that if you’re in your twenties and single, working at Starbucks and living with your parents might be a viable Plan Z, but if you’re in your thirties or forties with children, your Plan Z might be cashing in your 401(k).

4. Look at Professional Networking as Dating

Hoffman distinguishes between old-school “networkers” who pursue relationships based on what they think others can do for them and “relationship builders” who think of the other person first. Relationship builders “don’t keep score. They’re aware that many good deeds get reciprocated, but they’re not calculated about it. And they think about their relationships all the time, not just when they need something.” Hoffman likens relationship building to dating. “When you’re deciding whether or not to build a professional relationship with someone, there are many considerations: whether you like him or her; the capacity for the person to help you build your assets, reach your aspirations and position you well competitively and for you to help back in all the same ways,” Hoffman writes. “And, like with dating, you should always have a long-term perspective.”

Hoffman writes that networking gets a bad rap because most people don’t enjoy it. “It’s the presumption that building relationships in a professional context is like flossing,” he writes. “You’re told it’s important, but it’s no fun.” To motivate yourself for network building, think of the fact that your happiest memories were probably with someone else. “We’re not suggesting that you have to be an extrovert or life of the party,” he writes. “We just think it’s possible to appreciate the mystery of another person’s life experience. Building relationships is the thrilling if delicate quest to at once understand another person and allow that person to understand you.”

Despite the limitations of Dunbar’s Number (that your brain can only really handle about 150 people in your network), Hoffman illustrates that the bigger your professional network, the better. For instance, if you have 170 connections on LinkedIn, then you will have, on average 26,200 second-degree connections and more than 2 million that are three degrees away. Having access to all those people can help you in a pinch. Hoffman illustrates this by pointing out that Frank Hannigan, a software entrepreneur in Ireland, raised more than $200,000 in funding in eight days in 2010 by reaching out to his 700 first-degree connections. But 30% of the investors actually were second-degree connections.

Every once in a while, a great opportunity comes along that might help you leapfrog up the career ladder. For example, George Clooney was a struggling TV actor when he heard about ER in 1994. Clooney “caught wind of an opportunity, hustled to seize it, and catapulted his career to new heights.” Clooney didn’t necessarily know that ER would become as huge as it eventually did. “How did Clooney recognize ER for the breakout opportunity it was?” Hoffman writes. “Well, he was not certain it would be a breakout. You can never be certain.” But ER had “high quality” people on board and the opportunity was a lead role in a major network drama.
Such breakout opportunities may seem like blind luck, but Hoffman writes that you can develop thinking and behaviors that help you recognize when such “luck” appears. One habit is to remain curious about events that happen in your everyday life. For instance, Reed Hastings (the CEO of Netflix) was a software entrepreneur living in Silicon Valley in 1997 when he ran into a problem: Huge fees for returning Apollo 13 late to his video rental store. Hastings then began researching the industry and found DVDs were light and cheap to ship.
You should also be on the lookout for serendipitous meetings. For instance, John D’Agostino, then in his twenties, attended an event in the Waldorf Astoria in New York featuring Vincent Viola, the chairman of the New York Mercantile Exchange (NYMEX). D’Agosino made some remarks that caught Viola’s attention and the two set up a meeting. D’Agostino soon got hired as a manager for special projects on NYMEX and was eventually promoted to vice president of strategy.

Not everyone will appreciate your great idea, but if you really believe in it, you can put up with a lot of adversity. Hoffman offers a great illustration of this idea in Tim Westregen, the founder of Pandora Media. Westregen began working on the idea behind Pandora in 1999. By late 2002, the company was doing so badly that he arrived at his office to find an eviction notice at the door. In late 2003, four former employees sued him over deferred salaries. Over the next year or so, he pitched his idea to investors more than 300 times. “For almost 10 years, Pandora was beaten and battered by lawsuits, unfavorable legislation and the constant threat of bankruptcy,” Hoffman writes. “Remarkably, Tim and his team hung in there.”
As Taken From: Mashable.com
Images courtesy of Flickr, joi and Robert Scoble, and iStockphoto, kzenon and Flickr, csztova respectively.